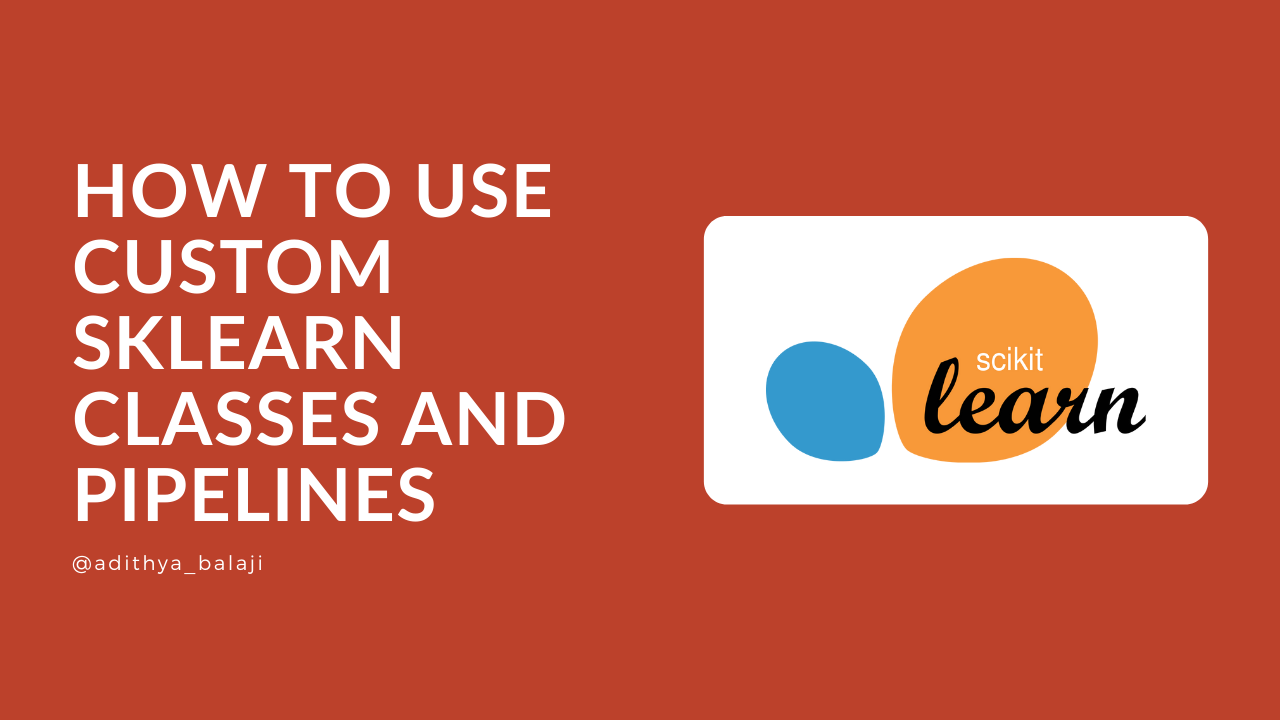 Scikit-learn (or sklearn) is the machine learning tool of choice for exploratory analysis by data scientists. It has over 45k stars on GitHub and was downloaded over 7 million times in the last month (March 2021) Their fit / transform / predict API is now ubiquitous in the python machine learning ecosystem with many other open source projects choosing to be compatible with that API.

In order to leverage the deeper features of the sklearn platform, it is useful to build custom data transformation pipelines using the provided classes. In this blog post, we will focus on using Custom Transformers and Pipelines which are essential to delivering replicable results.

When dealing with real-world data, it is often difficult to convert data manipulations into repeatable steps: this is where custom transformers come into play. Additionally, you might then want to apply these custom transformations in sequence. This is where Pipelines become useful. Putting these two tools together, you have a powerful playbook to handle all the messy data the real world throws at you.

Note: This blog post assumes that you already have a basic understanding of the sklearn API and concepts such as fit / transform / predict and so on. If some of that is new to you, please check out this fantastic page in the `sklearn` docs.

In this blog post we'll be using the motivating example of the Prescription Based Prediction (PBP) dataset. The PBP dataset combines the frequencies of prescribed medication under Medicare part D with practitioner data from the National Provider Identifier dataset. The authors of this aggregate dataset had a corresponding blog post explaining the dataset in a bit more detail. It is no longer live, but it is still available on The Wayback Machine.

Note: You'll need to configure your Kaggle API credentials to download the dataset or, you can simply go to Kaggle and manually unzip the data into the notebook folder. Simply uncomment the next line and replace it with your kaggle credentials. Read more about this here.

The data itself is in the uncommon .jsonl format which is a newline delimited dataset. Each line contains a json object. We can use pandas to read this dataset into a pd.DataFrame.

To understand this data a bit better, lets explode both of the json variables in the first row. We can use the pandas builtin function json_normalize which converts a json dictionary into a flat table.

Cool, let's now see what the distribution of those variables looks like.

It might be interesting to build a few models that predict some of these variables given the prescribed drugs and counts. In this blog post, we'll focus on estimating the settlement_type and the region.

Let's set the feature and response variables to their appropriate column and convert them to native Python lists. Let's also split the data into a train and validation set.

Developing sklearn API compatible transformers will allow us to make full use of other aspects of the library. In this example, we'll implement two custom transformers that leverage sklearn base classes to transform the response variable in the dataset.

First, let's build a way to quickly extract a desired response variable from y. We start by defining a class that inherits from TransformerMixin which gives us the fit_transform method if we define the fit and transform methods.

Next up, we define the constructor which requires two variables that tell us the key to extract from each json row and the dimensions of the data output. We also include an is_fit_ attribute which lets sklearn helper functions know that this transformer is already been "fitted" (i.e. it doesn't need to be fit)

Now, let's add the fit method. It is empty because we already have all the information we need to transform input data from the constructor alone. We return self (the object instance) as per convention.

Note: Here we use the neat @patch decorator to add instance methods to the class so that we don't have to have all of the code in a single jupyter cell.

Now let's add the transform functionality. We break this up into the two methods. The _extract_target method allows us to pull a particular key out of an input dictionary while also validating that the inputs are as we expect them. The transform method does the meat of the data conversion. It turns a list of json objects to a flat list of selected values.

Lastly, let's add the identity function as the inverse transform. There is no meaningful inverse since we lose data during the transform and future sections will require this function to have an implementation.

We can test that the above implementation works with some fake data. Given we selects "c" as the desired key, we should see [2 4 8] in the output which is exactly what we observe.

Phew, alright now that we've got that class completed we need to build a wrapper class that will allow us to actually use it in downstream applications.

Why, you may ask? In our case, we want a simple way to both transform the response variable and estimate on the response variable. Building a composite meta estimator is the way to go here considering the broader API constraints. To be honest, it's a bit of a quirk in the way the sklearn API was originally designed. By that, I mean that the original API design does not really take into account the possibility of transforming the response variable (specifically using Pipelines which we'll see in just a bit).

sklearn already has addressed that flaw with a built-in meta estimator called TransformedTargetRegressor, but unfortunately, it only works for regression estimators. (e.g. applying a log transform to your response variable) In our case, we are looking at a binary classification problem, so we'll need to roll our own.

First, let's define a constructor which takes in an instance of a classifier and a transformer.

Now when fitting this meta estimator, we need to fit both the classifier and the transformer. But first, we need to quickly validate the input y array. Stealing a bit of code from TransformTargetRegressor we can validate both the datatypes and shape of the inputs.

We use check_array which is a validation function from sklearn which converts inputs into np.ndarray form and validates a bunch of other things for us. We follow this with a bit of code to make sure that the dimensions of the response variable are correct. This is so that we can handle either the user passing a row vector or a column vector.

With the fit method in place, we turn our attention to predict which is where the magic happens.

We use the check_is_fitted method to make sure that the particular transformer is fit. sklearn has an internal convention which checks for a variable to exist with a trailing underscore (_) to know if an instance has been fit. Since we don't know the exact classifier or transformer, we cannot get any more specific than that. Unfortunately, Pipelines do not set the conventional attributes at fit time so we have no way of knowing if it has been fitted.

Next, we run the predict step of the classifier and run an inverse transformation on its output. (running the fit steps in reverse) This was why we made sure to define the inverse_transform method in our previous custom transformer. After that, we make sure to handle data dimension issues before returning the output.

Lastly, we have to add an updated score method. We cannot simply just use the inherited scoring method since we need to transform the ground truth variable before scoring. We use accuracy just the same as the super class.

Finally, we're ready to see if this class works!

Let's generate some random data with 100 samples to test in a Pipeline. We'll cover exactly how Pipelines work in the next section so don't worry about the details here. We just want to make sure that we see strings instead of numbers as the output of a prediction, which, we do indeed see.

Pipelines allow you to run multiple operations on an input dataset in succession before an estimation is performed. It was originally designed to be a linear step-by-step transformation template but there are now additional tools in the Pipeline toolkit that allow for horizontal joining of "columns". This is out of scope for this blog post but you can check out the docs for that here.

The main use case for this approach becomes apparent when we look to perform experiments on a particular machine learning approach. Pipelines make it straightforward to perform cross validation and grid searching across both the feature engineering and estimator hyperparameters. Pipelines make it very hard to accidentally get your data into an improper state which often happens when you have the same input variable being modified across multiple jupyter notebook cells.

In the next two cells we define a Pipeline which is applied to our PBP dataset. Since the last step in the pipeline inherits from BaseEstimtor the pipeline behaves exactly like an estimator. (enabling methods like predict and score) When we call fit, each of the steps fits the transformer and transforms the data before passing it to the next step.

Here we also clone settlement_pipe which duplicates its structure and parameters without keeping its state. We then swap out JSONTargetSelector with an instance that has the right target for the second pipeline.

Let's do some quick evaluations to see what the output looks like. Carefully selecting some specific rows which do not have too many prescriptions, we find the following output. Looks like 100% accuracy on this cherry picked, dataset... time to call it a day?

Anyways, when we actually score the models, we find the following training accuracies. Not too bad for no hyperparameter tuning.

The best place to learn more about these advanced sklearn features is actually their documentation. They have a user guide which is quite good, and their API is well documented as well. Additionally, I picked up most of the transformer tricks by reading the source code of the feature extraction transformers. If you have access to the PyCharm debugger, it is also really useful to step through the code as Pipeline.fit runs since a lot of functionality is abstracted away.